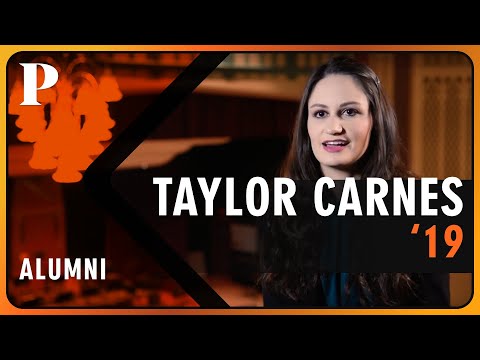 Taylor Carnes ’19 couldn’t have predicted that her experience working as a party princess would one day earn film awards – but that’s exactly what happened. “I knew I wanted to write a script about it because it was the most ridiculous job I ever had.” So, during her senior year, the vocal performance major stepped out of the limelight – and her comfort zone – to write, direct and produce an eight-minute short film called Almost Charming, a modern-day fairy tale told through pantomime and music.

The film is now available to stream on Amazon Prime, has been selected for 12 film festivals and has already earned four awards. “I’m lucky enough to have a lot of friends in film and in the industry that were able to help me with this idea,” said Carnes. Those friends included music therapy student Maddie Horton ’21 who played the lead actress and Media X graduate Joshua King ’19 who was the assistant director. The project was funded in part by the Michael J. Hall Student Opportunity Grant that supports enrichment opportunities and learning activities for Conservatory students, and is a great example of the cross-disciplinary collaboration opportunities available to students at Pacific.

Since graduating from Pacific, Carnes has worked for the Aspen Opera Center and Aspen Music Festival and School in Colorado, and was recently hired as assistant stage manager and production caller for the Los Angeles Opera.

Gifts of endowment allow donors to directly enhance the opportunity for the brightest minds to focus on advancing musical pedagogy and culture.

Pacific is committed to community engagement, a notion stronger than “outreach”.

In 2078 the Conservatory of Music will be 200 years old. What will music education be, how will communities use music to define identity, culture, expression?

Funding and support for tours, competitions and residencies augment student education and bring notoriety and recognition to Pacific. A consistent touring presence strengthens experiential learning of students, by allowing them to gain the skills necessary to be successful in their careers.

Conservatory graduates excel in all walks of life, including medicine, law, education, the ministry, healthcare and technology, among others. We believe that these students should not be held back by financial circumstances.